FRIENDSHIP SYSTEMS AG strives to reduce energy consumption and emissions by supporting its customers in improving their products, most notably ships as well as turbomachinery and engine components. Therefore, we have taken a look at the question how much CO2-emissions are saved from simulation-driven design with CAESES® every year. Read here what we have found.

90% of transport is made at sea. Commodities and goods are shipped in the very sense of the word. To do so, there currently are a bit more than 50 000 merchant vessels in service. (In 2017 the fleet comprised around 17 000 ships for general cargo, around 11 000 bulk carriers, more than 7 000 crude oil tankers, a bit more than 5 000 container ships and almost 4 500 RoPAX ferry and passenger ships according to statista.) Other larger ships such as search and rescue vessels, dredgers and salvage ships, offshore supply vessels, wind farm installation and support vessels, fishing vessels, tugs, pilot and work boats, naval ships and yachts also sum up to about 50 000 entities. Therefore, about 100 000 ships are in service today worldwide.

The CO2-emissions from shipping amount to 3% to 4% of global CO2-emissions which sum up to a total of 32 Billion tons of man-made CO2 every year. Therefore, around 1 Billion tons of CO2 can be attributed to ships. These numbers differ a bit, depending on the source. Many of the world’s biggest shipyards, most notably Hyundai, Samsung, DSME as the largest three yards, utilize CAESES® for the simulation-driven design of their ships. And so do many of the well-known model basins, consultants and ship design offices.

Many of our users report that they improve their hull forms with regard to resistance and propulsion by around 5%. Sometimes the savings are higher and sometimes they are a bit lower, say 3%, when setting out from a good starting point.

Optimizing the flow characteristics of hull forms to improve efficiency

Since CAESES® was first released in 2007 and since FRIENDSHIP SYSTEMS started to promote simulation-driven design of ship hull forms in the early 2000s more than 40 000 ships have come into service, partially replacing older vessels. A tangible number of these ships have undergone optimization for lower energy consumption directly by using CAESES® or indirectly by utilizing simulation-driven design as researched and promoted by FRIENDSHIP SYSTEMS AG. We estimate that around 10 000 ships need about 4% less energy by now than they would have needed in the past, with an additional 1 000 ships every year. In 2019 this is approximately 10% of the fleet. 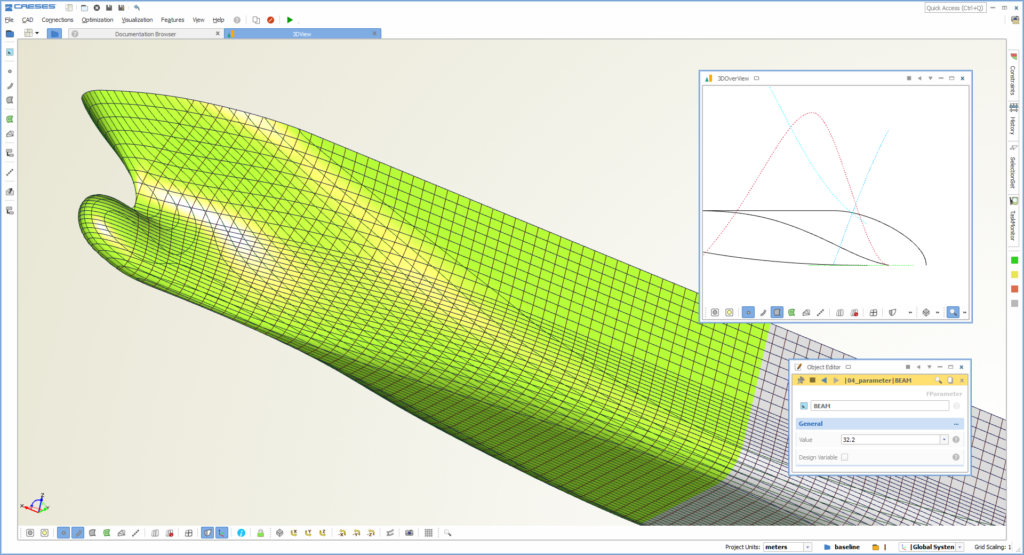 Naturally, ships are not always at sea and they are not continually benefiting fully from the energy savings achieved at the design stage. We therefore assumed an average of 220 days at sea per year and a utilization rate of 75% of the possible savings when sailing.

Bringing all this together we estimate the CO2-reductions to amount to 2 835 288 tons in 2019. Keeping the many assumptions and rougher numbers in mind, we felt that we should introduce a very conservative safety factor of 2 into the analysis. Rounding off to a smooth number we then get an annual reduction of 1 400 000 tons of CO2, i.e., much more than 1 000 000.

“Our CAESES® users manage to reduce CO2-emissions by much more than 1 000 000 tons annually. This is why we do what we do and this makes me extremely proud of our team and company.”

How does this relate to emissions from other sources? A standard semi-detached family home in Germany would burn about 1.5 tons of oil for heating per year, emitting some 3.9 tons of CO2. That means that the above savings equal the private emissions of around 350 000 houses, an equivalent to providing cozy homes for the population of a large German city such as Munich.

Let us take a look at a representative ship for estimating CO2-emissions in a bottom-up approach. A container ship with a capacity of 4 100 containers (TEU) would have an engine of 37 000 kW and would typically be at sea for about 6000 hours per year. Fuel consumption is approximately 0.166 kg/kWh. Assuming a utilization rate of 75% and an improvement of 4%, approximately 1 100 tons of fuel are saved annually. These savings correspond to just about 3 000 tons of CO2-emissions annually for one single ship.

As a second example let us analyze a slower steaming Aframax tanker with an engine of 13 500 kW. With similar assumptions as for the container ship, the yearly savings then amount to about 400 tons of fuel and a bit more than 1 000 tons of CO2. Consequently, the lower estimate of 1 400 000 tons of CO2-emissions derived from the top-down approach for 10 000 ships seems very conservative indeed.

Apart from the ecological impact, there naturally is an economical component, too. Increasing energy efficiency readily reduces operational costs in shipping. World bunker prices for IFO 380 are around 430 Euros per ton (February 2019). The annual costs are therefore reduced by 473 000 Euros for the container ship and by 172 000 Euros for the Aframax tanker. Since most ships are in operation for 20 years this is adding up to a pretty large sum.

We believe it may not be so important which of the numbers, those derived from the top-down or the bottom-up approach, are more accurate or more reliable. The important message is that each ton of CO2 that is not emitted helps to reduce mankind’s environmental footprint. And we are more than happy to be part of the effort of making our world greener.

2 thoughts on “Yearly Reductions of CO2-Emissions by CAESES”