The polycurve type in CAESES® is something that gets used quite a lot, in particular in the context of surface generation through the meta surface technology where you need to have a single curve definition. The polycurve simply takes a set of N curves and represents a single curve with an own curve domain based on this input. Curve domains typically run in the interval [0,1]. The interesting thing is that the curve domain is then defined according to the number of input curves.

Let’s assume you want to get the exact end position of the first input curve. For N=3 input curves of a polycurve, the polycurve parameter is simply t1=1/3. The connecting parameter locations are defined by t_i = i * 1 / N where N is the number of input curves, and i runs from 1 to N-1.

Here is an example where the screenshots are taken from CAESES®. A simple profile gets modeled which runs from the trailing edge (right-hand side) via the leading edge back to the trailing edge. Three curves are generated separately and then put into a polycurve:

If you now create a 3D surface (say a lofted surface or a meta surface) from such a profile, you can directly split the generated surface in order to have the individual surface patches available. This is helpful when you need to split a single 3D surface into several pieces e.g. for more control in the meshing process and the simulation. See the following screenshot:

In this example, three image surfaces are created based on the single 3D surface. The next screenshot shows how the second surface i.e. the leading edge gets defined:

The surface u-direction (“U-parameters”) corresponds to the profile definition, while the v-direction is the sweep direction in this demo example. Just for interested readers and to complete this short blog post: Check out the feature definition of the profile from which the single surface gets created… 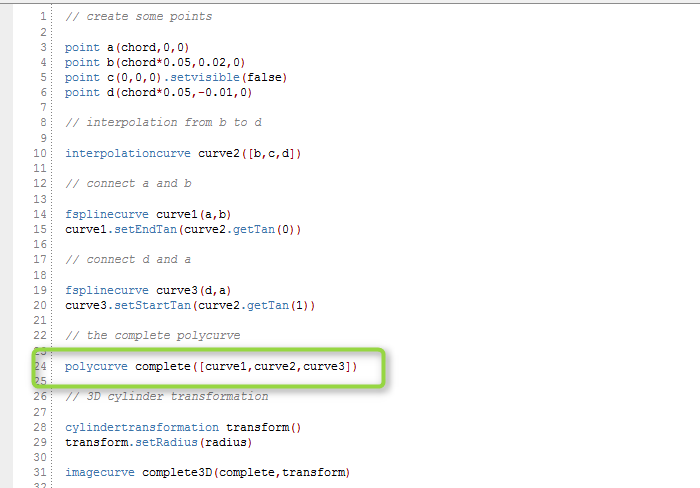 The polycurve receives the 3 input curves (fsplinecurve, interpolationcurve, fsplinecurve) which is highlighted in the final screenshot. The profile is then transformed into the 3D space by using a cylinder transformation. Don’t get scared by the feature programming language – you can set up such a simple example also in the graphical user interface of CAESES®, interactively and without any further programming know-how 🙂

Do you like this short article? Then please share it with your friends or colleagues. Also check out our product pages for more information about CAESES®.