The design of engine components for cars is a tricky task, because there are so many constraints involved. An example is the duct that is located right before the catalytic converter. This component is often bent quite heavily due to space constraints. As a result, this makes it a tough challenge to design it in a way that the flow distribution is sufficiently uniform. In other words, bad flow characteristics in the catalytic converter lead to poor performance, and possibly higher emissions.

In one of our customer projects we had worked on the optimization of such a duct, where three tools were involved:

In the following sections, we briefly outline the workflow of this design task.

We prepared the baseline design such that a closed geometry could be generated for all subsequent variants, including inlet and outlet boundaries for which we used a coloring mechanism. In CAESES®, the boundaries can be named by setting custom color names and by assigning these colors to the surface patches. The following picture shows a typical colored STL output: 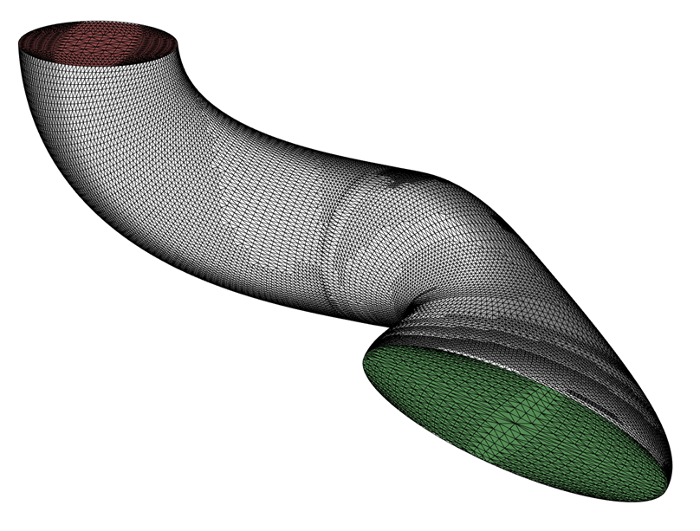 Example of a Closed Duct Geometry

Setting up a closed geometry needs to be done only once, and then a user can recycle all settings during a design study or optimization. The next animation shows automated shape changes of the duct geometry: For each design a closed STL file is automatically generated and later on transferred to the meshing tool. Note that in the animation below we show very strong changes, just for demonstration purposes. Usually, the geometry changes are much smaller when starting from a given baseline design.

Automated Shape Changes of the Duct

One of the key benefits of using GridPro is that a flow-aligned structured mesh can be generated quite easily, and it also adapts automatically to a change in the geometry. The output mesh can be directly converted to the OpenFOAM format, and all of these GridPro commands are simply written into a shell script so that it can be automated right away.

For the OpenFOAM CFD setup, we used a compressible gas and involved a porous media for the catalytic converter. The control files of OpenFOAM were set up according to the customer requirements (mass flow, temperature etc.). The OpenFOAM execution was again written into a shell script so that everything was ready for batch-mode automation. 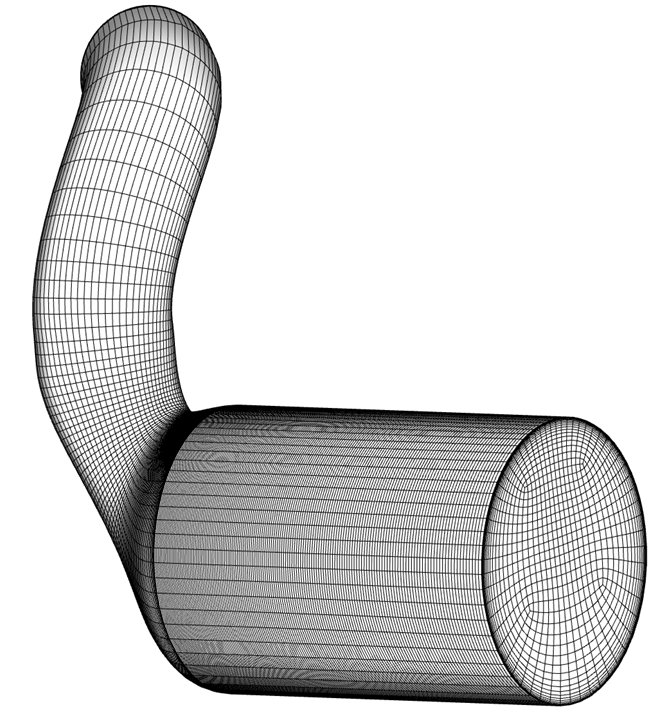 Use of Porous Medium

Since the meshing and CFD process is controlled by shell scripts and the OpenFOAM control files, we could create a software connector in CAESES®, to integrate and automate the entire process through the CAESES® user interface. The control files (dicts etc.) were loaded into CAESES®, and parameterized for direct control of the settings. For an easier assessment, we also visualized the 3D flow data in the user interface of CAESES®, using the VTK output data from OpenFOAM.

Visualization of Pressure Distribution in CAESES

The design viewer in CAESES® was also used for side-by-side comparisons of the generated design candidates. This usually includes geometry screenshots and the 3D geometry itself, but also typical CFD results such as convergence plots for each design. With such an overview and the data from the result table, it is easy to finally pick the best candidate with maximum flow uniformity. 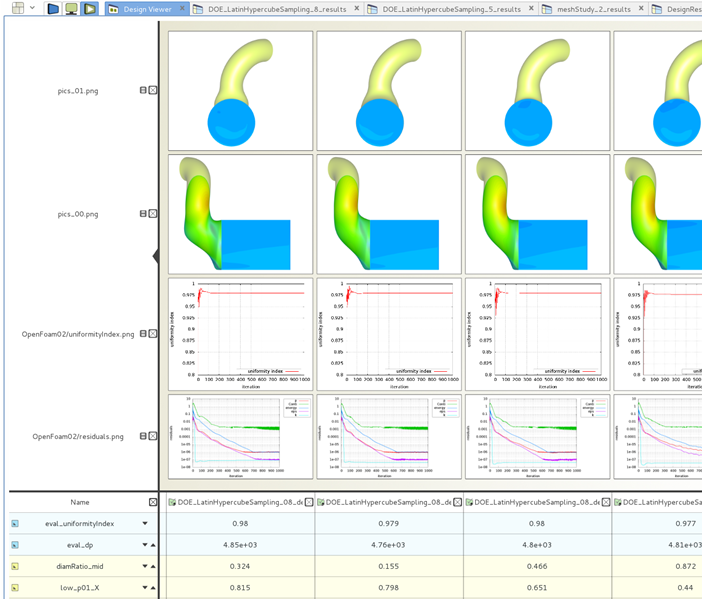 The pressure loss was also taken into account in this project, at least up to a certain extent for finding a good compromise between flow uniformity and pressure loss. As a result, we gained about 2.1% improvement for the uniformity, while further reducing the pressure loss by 5.5%.

Are you interested in CFD-driven design optimization? Then stay tuned and sign up for our newsletter to receive short reads like this one here! Don’t worry, we won’t bother you with too many emails. Of course, you can unsubscribe at any time 🙂